How Does Climate Control Work A Brief History of Climate Control

Climate control is an optional luxury feature in vehicles that nowadays is considered standard equipment, and it is rare to find a new vehicle that does not offer some form of climate control. The first vehicle to feature heat was the 1929 Ford Model A, while the first vehicle to feature air conditioning was in 1939 in the Packard as a $279 add-on named the “Weather Conditioner” that would take up half the trunk and was connected to the engine. Due to the Weather Conditioner having no way to regulate air flow and the only way to turn on and off was to install and remove a belt from the compressor, but due to low interest in the product it was discontinued in 1941. In 1953 Chrysler tried again to bring air conditioning back to vehicles with advertisements that it will also help reduce dust, pollen, humidity and tobacco smoke. This system would only cool the vehicle with only three different settings – low, medium and high and would blow the air towards the roof of the cabin rather than directly onto the passengers. In 1964 Cadillac released “Comfort Control” which was the world’s first automatic climate control system, this system was very rudimentary to today’s standards but was revolutionary for its time. Comfort Control operated on 3 different thermistors (thermal resistors), one for outside air temperature, one for cabin temperature and one for the duct temperature. 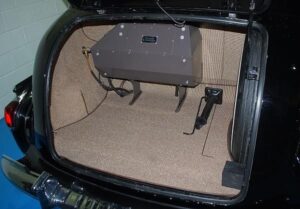 How does the heat work?

In modern day vehicles the cabin heat works off of three main components, the thermostat, water pump and heater core. The heat in your cabin is produced through the heat coming off of the coolant utilized to cool your engine. If you notice on those extra chilly mornings that your car takes a long time for the heat to start working, look at your engine temperature and you’ll often find that it is also performing below normal range. The reason this happens is due to the thermostat whose purpose is to maintain that optimal engine temperature while also being able to achieve optimal temperature as quickly as possible. The thermostat works by means of a wax ball designed to open and close the thermostat at certain temperatures to restrict and allow the coolant to start passing into the radiator to begin the cooling process, or when not warm enough will circulate the coolant back into the engine block. This flow of coolant is created by the water pump that is located on the engine block where there should always be coolant flow, regardless of engine temperature. Once that thermostat begins to open and there is coolant flowing through the rest of the cooling system it will make a pass through the heater core where you can then begin to feel heat inside the cabin.

The heater core is commonly located inside a heater box located behind the glovebox, and in some of the larger vehicles such as minivans and SUVs equipped with front and rear climate control there is an auxiliary heater core often located in the side paneling of the trunk. A heater core works and looks very similar to a radiator where the coolant will flow through the small passageways known as “fins” on the radiator or heater core that optimize the surface area of hot coolant touching the outside air for that heat transfer. The amount of air flowing through and around the radiator or heater core directly affects how much heat is transferred which is why it is important that your engine cooling fans are operational (otherwise you are not maximizing the amount of airflow over the radiator to cool the engine).  For those same reasons why your cooling fan is important to the engine cooling, it is important that your blower motor is operational to create the airflow over the heater core to make the cabin heating work.

Inside the heater box and working out towards all the HVAC vents there is a series of doors utilized to direct air flow. There are typically three types of HVAC doors in your car, a mode door, blend door and recirculation door. The mode door is responsible for controlling which vents the air flows to. The blend door is responsible for the mixture of air coming out of the heater core section of the heater box and how much air flow is coming from the evaporator portion of the air box to get a proper mixture for what you set your temperature to. Lastly, the recirculation door is responsible for if the air flow from the blower motor is taken from inside the cabin or from fresh air. 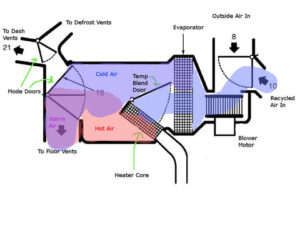 How does the A/C work?

The A/C in your car works in almost the opposite manner by having the evaporator, which typically sits right next to the heater core, remove heat and humidity from the air around it. The evaporator looks very similar to a heater core with lots of little fins allowing the refrigerant to pass through as a liquid, and once it is exposed to the warmer air around it turns into a gas by absorbing the heat.  The humidity in the air condenses down to water that builds up on the evaporator and will eventually drain out through a drain tube (which is why you can often see a puddle of water behind your passenger tire after a long drive in the summer from where that tube typically dispenses). Once the refrigerant leaves the evaporator in a gas state it will work through the compressor that takes that low pressure gas and compresses it into a high pressure gas that is more efficient to circulate through the A/C system.  After the refrigerant gas is compressed into a high pressure state, it is circulated into the condenser that is often mounted near the radiator in the front of your car. The condenser looks and works in a similar manner as the radiator, heater core and evaporator where the high pressure gas passes through a series of small fins to remove the heat from the refrigerant gas and return it to a liquid state. Once the refrigerant is in a liquid state it passes to the receiver drier that is responsible for removing some of the water from the freon and filtering any debris found in the liquid freon. From the receiver drier the liquid freon goes through a metering device that reduces the refrigerant pressure prior to going through the evaporator where it will begin the process all over again.

Why do I Still Need A/C in the Winter?

It only takes one chilly winter day in Colorado and you will notice that there is a lot more fog building up on your windows compared to any other season of the year. The excess of condensation is caused by the air inside the cabin being warmer than the air outside.  Thus the humidity in the air around the windows gets cold and turns back into a liquid state that then builds up on your windows.  Like mentioned in the previous section, the A/C system works in part by removing some of the humidity in the air and can drastically help reduce some of that humidity inside the cabin of your car to help remove any built up condensation as well as prevent more from forming.  In addition to being able to remove the fogging and condensation on your windows, running the A/C in the winter can also help minimize any mold and bacteria from forming inside of your A/C system that frequently builds up if the A/C system is not regularly utilized. Unlike the heating system where coolant is consistently flowing through the entire system to include the heater core even when it’s not in use, the A/C system is an isolated system in your car that doesn’t work hand in hand with any other systems.  Lastly, it is wise to continue to use the A/C during winter to simply prolong the life of all the components in that system because there are lots of little seals and rubber components that get added lubrication from the consistent flow of the liquid refrigerant, as well as many moving and rotating that when not used frequently will be prone to seizing.

The refrigerants used in homes and business HVAC systems are different from those used in automotive applications.  The refrigerant used in vehicles prior to 1995 was an R-12 refrigerant, commonly coined by DuPont as “Freon”.  Between 1995 to 2016, most vehicles used R-134a refrigerant (which was deemed to be better for the environment with less CFC’s than its predecessor).  In 2016/17, automotive manufacturers started to implement the use of YF1234 in most newer vehicles and became mandatory in 2021.  All these refrigerants listed above are not compatible with one another.  Furthermore, those consumers with Hybrid vehicles must have their systems serviced with a hybrid ONLY reclaiming/charging station as these machines have a different lubrication system that is NOT compatible with the PAG only commonly used with non-hybrid vehicles.

At Seyfer Automotive we strive to provide our neighbors in Wheat Ridge, Arvada, Lakewood and surrounding areas the best service and treat you like one of our own friends and family. We promise to never recommend a service for your vehicle that we would not recommend performing on one of our own personal vehicles, and whenever possible alert you for upcoming maintenance so you never get a surprise repair bill. If you have any questions on how to best maintain your vehicle or schedule your A/C diagnostics, next oil change or general repair, call one of Denver’s longest standing Auto Repair Shop’s today! (303) 422-5261.